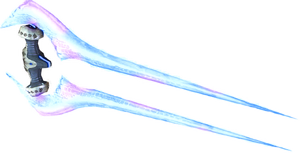 "A noble and ancient weapon, wielded by the strongest of Sangheili, requires great skill and bravery to use, and inspires fear in those who face its elegant plasma blade."

The Type-1 Energy Weapon/Sword, commonly known as the Energy Sword, is a close quarters weapon of the Twilight Covenant exclusively used by the Sangheili.

The Type-1 Energy Weapon/Sword consists of a curved hilt, which houses an energy storage and generation device, as well as the blade projector; that forms a blade of superheated plasma, stabilized by two small magnetic field generators built into the handle of the weapon — this forms and contains the oval shaped, ionized blades for which the weapon is recognized. The weapon is powered by a small battery that supplies power to the plasma generation device and magnetic field generators which generate and contain the plasma needed to form the blade. The battery's energy is reduced for each successful strike. Each strike from the sword will drain the battery by 10% of its maximum energy output. Once the battery power is fully depleted, the sword will deactivate unless recharged.

The Type-1 Energy Weapon contains a failsafe mechanism that can permanently disable the weapon if the Sangheili wielding it drops it. When dropped, the failsafe engages by deactivating the magnetic field before dispersing the plasma. The plasma then consumes the handle and thus destroys the weapon. The failsafe is included to prevent enemy infantry from acquiring the weapon and using it, and is yet another insight to Sangheili tactics.

The energy sword is the signature weapon of the Sangheili, and has been their weapon of nobility since its creation during one of their Ages of Discovery. Viewed as a holy weapon the Sangheili pride themselves on their skills with this weapon and believe that it is better for a Sangheili to fall on his sword as an act to redeem his honor or to die by it. The Sangheili are also very strict on who can be trained in the art of swordsmanship - only aristocrats are permitted to wield energy swords and sword wielders are no longer eligible for marriage, although it is not known how strictly this was enforced if at all. Fal 'Chavamee was a skilled swordsman and instructor, despite being married. Breeding with any female they choose is permitted, married or otherwise, to ensure successful transmission of "swordsman" genes. In service to the Covenant, Sangheili of a high or important rank are permitted to wield this weapon - lower ranks are not permitted to wield the

sword because of its high status. In the Covenant, Sangheili Zealots, special operations units, and stealth troops, as well as Sangheili Honor Guardsman, are permitted to use energy swords.

The Type-1 Energy Weapon is an extremely powerful and effective melee weapon in close quarters combat. A single strike can penetrate through the energy shield systems and into the armor and flesh of a SPARTAN or a Sangheili. This is thanks in part to the design of the weapon which utilizes ionized gas rather than traditional shaped, solid matter - because the Type-1 Energy Weapon lacks any solid material in which to hold, or impale anything, the sword does not cut or carve in the traditional sense, but rather boils anything it comes into contact with, this allows the weapon to pass though any type of material including the toughest metal with ease.

Injuries to living creatures by the Type-1 Energy Weapon can range from bad to gruesome. Stabs wounds by the Type-1 Energy Weapon are, in most cases, fatal — as the blade passes through the body, the innards of the body are burned and cauterized by the extreme temperatures produced by the blades. Body fluids in the area of the stab wound are flash vaporized upon contact — organs within the area of the stab wounds can suffer life threatening damage dependent upon the type of organ struck, effects of fluids trapped in organs or arteries in addition to the expansion of heat would cause ruptures or small explosions causing additional damage to the victim. Survival is minimal at best and in the case of non-vital organs being stabbed with the energy sword, proper medical treatment must be applied as soon as possible to ensure long term survival. Because of the swords sheer destructive power, dismemberment is another common form of fatality to victims, ranging from decapitation to bodies being sliced in half. Loss of limbs is a common injury, while not fatal, will permanently disable a victim.

The sheer destructive power of the sword makes it a weapon to be feared on any battlefield and it is known for its physiological affects on human soldiers.

The Type-1 Energy Weapon's main disadvantage is that it is purely a close-quarters weapon, any weapon outside of the effective range puts the wielder at risk. It is for this reason the Sangheili approach sword combat on the battlefield in two different ways, by funneling the enemy into close-quarters to allow them to strike, or to apply a form of stealth using both technology and technique. Without these, the Sangheili is vulnerable to attack by different types of weapons both Human and Covenant. Infantry with over-shielding are also more resistant when facing this weapon as it can take two strikes before the shield system fails.

The Type-1 Energy Weapon is also vulnerable to other magnetic fields, as they can block, disrupt, or possibly even alter the functionality of the sword. Two energy swords clashing together create a small disruption of energy as a result of the same type of magnetic fields clashing together, this clash has a slight area of effect damage that can affect the combatants.

Like most other Covenant weapons, the Type-1 Energy Weapon is battery powered, requiring the user to either recharge the weapon or discard it when the power is depleted. Although the handle can be used as a club, the Energy Sword's combat effectiveness at that point is minimal. The strength and lethality of the sword in the games are compensated for the sake of gameplay.

There are two ways a player in Halo 2, Halo 3 and Halo: Reach can attack, the first is to lunge with the energy sword. With this, the player lunges forward at the other player. However, this only works when the aiming reticule is lit red, indicating that the opposing player is within range. The second attack is the simple melee, this performs a quick underhanded or overhanded swipe.

Retrieved from "https://halofanfiction.fandom.com/wiki/Energy_Sword?oldid=4215"
Community content is available under CC-BY-SA unless otherwise noted.